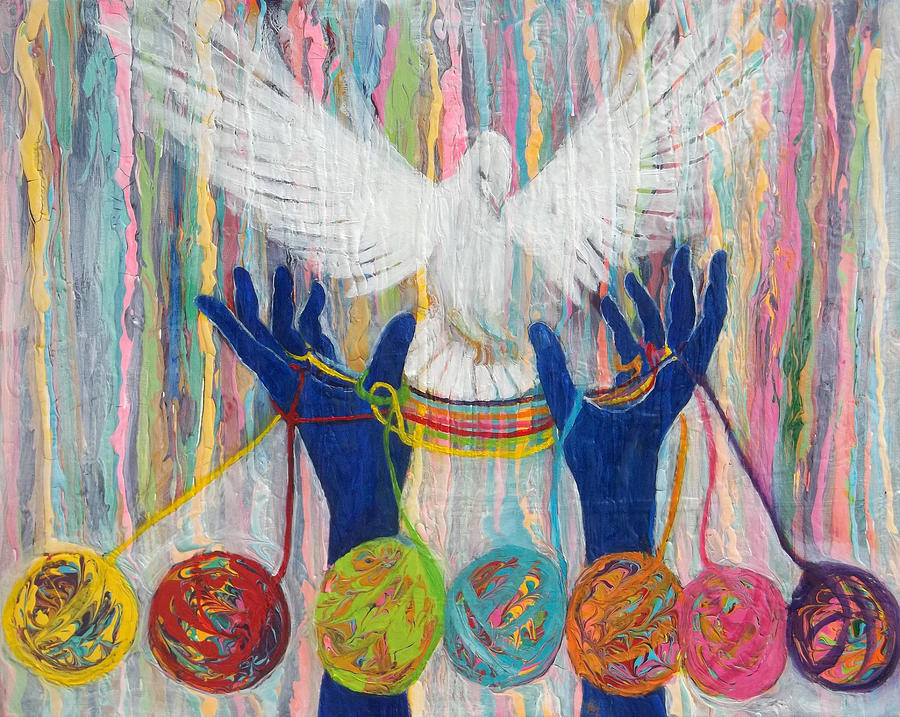 This piece has been already sold.   Please feel free to contact the artist directly regarding this or other pieces.

Painting - Oil Over Acrylic On Canvas

This spontaneous image and the scriptures that follow were given to me on July 22,2012. The words in brackets are my paraphrase to scripture so as not to have to put several chapters of the bible in the description, but I encourage you to read on your own. I use NRSV but feel free to use any.

1 Samuel 25:7 " 'Now I hear that it is sheep-shearing time. When your shepherds were with us, we did not mistreat them, and the whole time they were at Carmel nothing of theirs was missing. 8 Ask your own servants and they will tell you. Therefore be favorable toward my young men, since we come at a festive time. Please give your servants and your son David whatever you can find for them.' " 9 When David's men arrived, they gave Nabal this message in David's name. Then they waited. 10 Nabal answered David's servants, "Who is this David? Who is this son of Jesse? Many servants are breaking away from their masters these days. 11 Why should I take my bread and water, and the meat I have slaughtered for my shearers, and give it to men coming from who knows where?" 12 David's men turned around and went back. When they arrived, they reported every word. 13 David said to his men, "Put on your swords!" So they put on their swords, and David put on his. About four hundred men went up with David, while two hundred stayed with the supplies. 14 One of the servants told Nabal's wife Abigail: "David sent messengers from the desert to give our master his greetings, but he hurled insults at them. 15 Yet these men were very good to us. They did not mistreat us, and the whole time we were out in the fields near them nothing was missing. [David was insulted and was ready to kill. Abigail, Naban's wife heard of it and brought food and supplies and fell to her knees in front of David and his army asking that the guilt of her husband be on her, this is the end of her speech...] 30 When the LORD has done for my master every good thing he promised concerning him and has appointed him leader over Israel, 31 my master will not have on his conscience the staggering burden of needless bloodshed or of having avenged himself. And when the LORD has brought my master success, remember your servant." 32 David said to Abigail, "Praise be to the LORD, the God of Israel, who has sent you today to meet me. 33 May you be blessed for your good judgment and for keeping me from bloodshed this day and from avenging myself with my own hands. 34 Otherwise, as surely as the LORD, the God of Israel, lives, who has kept me from harming you, if you had not come quickly to meet me, not one male belonging to Nabal would have been left alive by daybreak." 35 Then David accepted from her hand what she had brought him and said, "Go home in peace. I have heard your words and granted your request."

John 13:12 After he had washed their feet, had put on his robe, and had returned to the table, he said to them, "Do you know what I have done to you? 13 You call me Teacher and Lord�and you are right, for that is what I am. 14 So if I, your Lord and Teacher, have washed your feet, you also ought to wash one another's feet. 15 For I have set you an example, that you also should do as I have done to you. 16 Very truly, I tell you, servants are not greater than their master, nor are messengers greater than the one who sent them. 17 If you know these things, you are blessed if you do them. 18 I am not speaking of all of you; I know whom I have chosen. But it is to fulfill the scripture, "The one who ate my bread has lifted his heel against me.'

8 One day Elisha was passing through Shunem, where a wealthy woman lived, who urged him to have a meal. So whenever he passed that way, he would stop there for a meal. 9 She said to her husband, "Look, I am sure that this man who regularly passes our way is a holy man of God. 10 Let us make a small roof chamber with walls, and put there for him a bed, a table, a chair, and a lamp, so that he can stay there whenever he comes to us." 11 One day when he came there, he went up to the chamber and lay down there. 12 He said to his servant Gehazi, "Call the Shunammite woman." When he had called her, she stood before him. 13 He said to him, "Say to her, Since you have taken all this trouble for us, what may be done for you? Would you have a word spoken on your behalf to the king or to the commander of the army?" She answered, "I live among my own people." 14 He said, "What then may be done for her?" Gehazi answered, "Well, she has no son, and her husband is old." 15 He said, "Call her." When he had called her, she stood at the door. 16 He said, "At this season, in due time, you shall embrace a son." She replied, "No, my lord, O man of God; do not deceive your servant." 17 The woman conceived and bore a son at that season, in due time, as Elisha had declared to her. [The son later took ill and died so she found Elisha..] 30 Then the mother of the child said, "As the Lord lives, and as you yourself live, I will not leave without you." So he rose up and followed her. 31 Gehazi went on ahead and laid the staff on the face of the child, but there was no sound or sign of life. He came back to meet him and told him, "The child has not awakened." 32 When Elisha came into the house, he saw the child lying dead on his bed. 33 So he went in and closed the door on the two of them, and prayed to the Lord. 34 Then he got up on the bed and lay upon the child, putting his mouth upon his mouth, his eyes upon his eyes, and his hands upon his hands; and while he lay bent over him, the flesh of the child became warm. 35 He got down, walked once to and fro in the room, then got up again and bent over him; the child sneezed seven times, and the child opened his eyes. 36 Elisha summoned Gehazi and said, "Call the Shunammite woman." So he called her. When she came to him, he said, "Take your son." 37 She came and fell at his feet, bowing to the ground; then she took her son and left.

[I believe this now that you pray this psalm: with the following verses highlighted]:
Psalm 51:10 Create in me a clean heart, O God, and put a new and right spirit within me. 11 Do not cast me away from your presence, and do not take your holy spirit from me. 12 Restore to me the joy of your salvation, and sustain in me a willing spirit. 13 Then I will teach transgressors your ways, and sinners will return to you. 14 Deliver me from bloodshed, O God, O God of my salvation, and my tongue will sing aloud of your deliverance.

Hebrews 7:11 Now if perfection had been attainable through the levitical priesthood�for the people received the law under this priesthood�what further need would there have been to speak of another priest arising according to the order of Melchizedek, rather than one according to the order of Aaron? 12 For when there is a change in the priesthood, there is necessarily a change in the law as well. 13 Now the one of whom these things are spoken belonged to another tribe, from which no one has ever served at the altar. 14 For it is evident that our Lord was descended from Judah, and in connection with that tribe Moses said nothing about priests. 15 It is even more obvious when another priest arises, resembling Melchizedek, 16 one who has become a priest, not through a legal requirement concerning physical descent, but through the power of an indestructible life. 17 For it is attested of him, "You are a priest forever, according to the order of Melchizedek."

Congratulations on your sale

Thank you Odon, and David thank you for your encouragement and continued support!

I bought the largest print available. It speaks to me at such a profound level. We are creators and the very essence or stuff that we use to create is available to all of us. We form intentions and then we bring those intentions into creation through our choices, our mind sets, and our actions. We become weavers which is what this print signifies for me. Anne creates amazing paintings.

Congratulations on your sale.

Selia and Elena thanks so much!