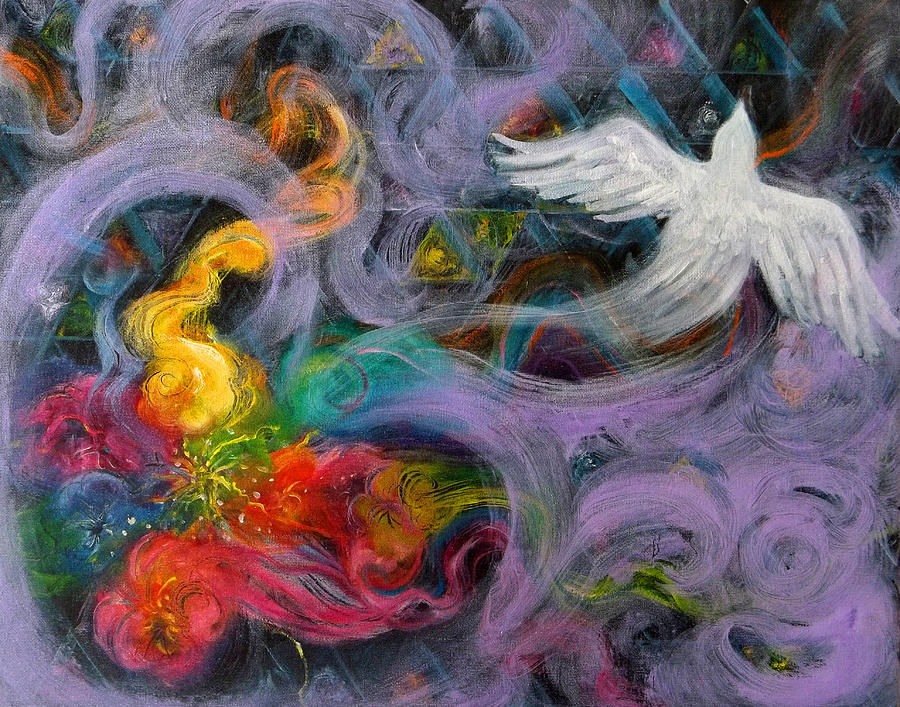 This piece has been already sold.   Please feel free to contact the artist directly regarding this or other pieces.

Number 10 in Holy Spirit led paintings Started part of this painting months ago and I knew it wasn't complete. The Lord gave me scriptures and I knew what to do.
Psalm 119: 103 How sweet are your words to my taste, sweeter than honey to my mouth! 104 Through your precepts I get understanding; therefore I hate every false way. 105 Your word is a lamp to my feet and a light to my path.

1Kings1:33 the king said to them, "Take with you the servants of your lord, and have my son Solomon ride on my own mule, and bring him down to Gihon. 34 There let the priest Zadok and the prophet Nathan anoint him king over Israel; then blow the trumpet, and say, "Long live King Solomon!' 35 You shall go up following him. Let him enter and sit on my throne; he shall be king in my place; for I have appointed him to be ruler over Israel and over Judah." 36 Benaiah son of Jehoiada answered the king, "Amen! May the Lord, the God of my lord the king, so ordain. 37 As the Lord has been with my lord the king, so may he be with Solomon, and make his throne greater than the throne of my lord King David." 38 So the priest Zadok, the prophet Nathan, and Benaiah son of Jehoiada, and the Cherethites and the Pelethites, went down and had Solomon ride on King David's mule, and led him to Gihon. 39 There the priest Zadok took the horn of oil from the tent and anointed Solomon. Then they blew the trumpet, and all the people said, "Long live King Solomon!" 40 And all the people went up following him, playing on pipes and rejoicing with great joy, so that the earth quaked at their noise.
1Kings2:1 When David's time to die drew near, he charged his son Solomon, saying: 2 "I am about to go the way of all the earth. Be strong, be courageous, 3 and keep the charge of the Lord your God, walking in his ways and keeping his statutes, his commandments, his ordinances, and his testimonies, as it is written in the law of Moses, so that you may prosper in all that you do and wherever you turn. 4 Then the Lord will establish his word that he spoke concerning me: "If your heirs take heed to their way, to walk before me in faithfulness with all their heart and with all their soul, there shall not fail you a successor on the throne of Israel.'

Luke 5: 36 He told them a parable also: "No one tears a piece from a new garment and puts it upon an old garment; if he does, he will tear the new, and the piece from the new will not match the old. 37 And no one puts new wine into old wineskins; if he does, the new wine will burst the skins and it will be spilled, and the skins will be destroyed. 38 But new wine must be put into fresh wineskins. 39 And no one after drinking old wine desires new; for he says, 'The old is good.'"

2Samuel14:11 Then she said, "Please, may the king keep the Lord your God in mind, so that the avenger of blood may kill no more, and my son not be destroyed." He said, "As the Lord lives, not one hair of your son shall fall to the ground." 12 Then the woman said, "Please let your servant speak a word to my lord the king." He said, "Speak." 13 The woman said, "Why then have you planned such a thing against the people of God? For in giving this decision the king convicts himself, inasmuch as the king does not bring his banished one home again. 14 We must all die; we are like water spilled on the ground, which cannot be gathered up. But God will not take away a life; he will devise plans so as not to keep an outcast banished forever from his presence.

Obadiah:1 The vision of Obadiah. Thus says the Lord God concerning Edom: We have heard a report from the Lord, and a messenger has been sent among the nations: "Rise up! Let us rise against it for battle!" 2 I will surely make you least among the nations; you shall be utterly despised. 3 Your proud heart has deceived you, you that live in the clefts of the rock, whose dwelling is in the heights. You say in your heart, "Who will bring me down to the ground?" 4 Though you soar aloft like the eagle, though your nest is set among the stars, from there I will bring you down, says the Lord.

Hebrews 8:1 Now the main point in what we are saying is this: we have such a high priest, one who is seated at the right hand of the throne of the Majesty in the heavens, 2 a minister in the sanctuary and the true tent that the Lord, and not any mortal, has set up. 3 For every high priest is appointed to offer gifts and sacrifices; hence it is necessary for this priest also to have something to offer. 4 Now if he were on earth, he would not be a priest at all, since there are priests who offer gifts according to the law. 5 They offer worship in a sanctuary that is a sketch and shadow of the heavenly one; for Moses, when he was about to erect the tent, was warned, "See that you make everything according to the pattern that was shown you on the mountain." 6 But Jesus has now obtained a more excellent ministry, and to that degree he is the mediator of a better covenant, which has been enacted through better promises. 7 For if that first covenant had been faultless, there would have been no need to look for a second one.

Congrats on your sale!!

Oliver and Sandra thank God so much!