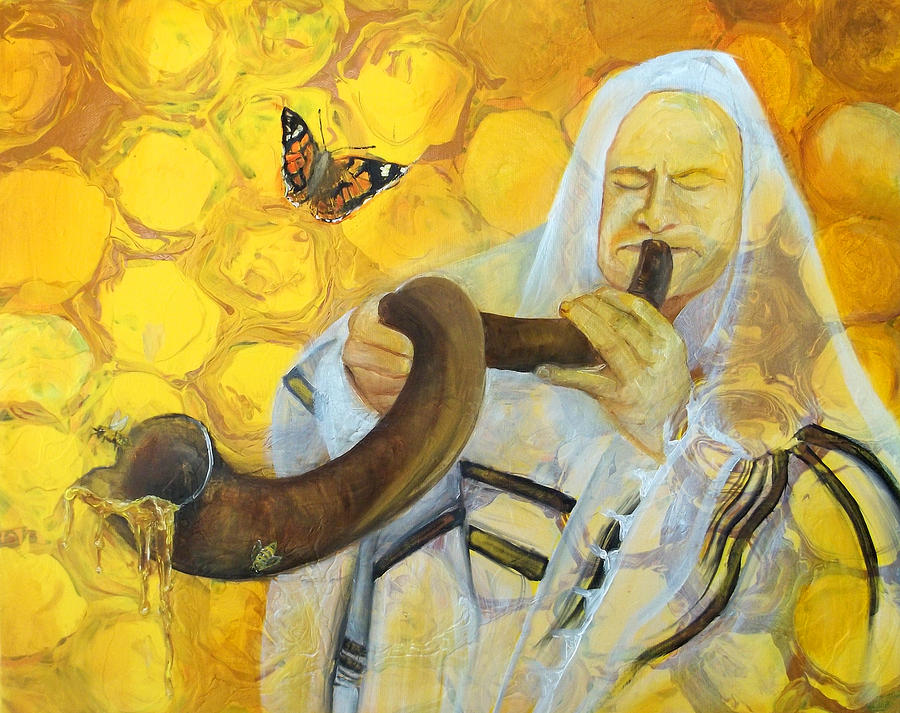 This is a Holy Spirit lead painting. Most of the time I paint first and then get the scripture. In this case I got the scripture first and then painted. There seems to be a pattern of tearing in the scriptures. Here's the scripture:
Judges 14:5 Then Samson went down with his father and mother to Timnah. When he came to the vineyards of Timnah, suddenly a young lion roared at him. 6 The spirit of the Lord rushed on him, and he tore the lion apart barehanded as one might tear apart a kid. But he did not tell his father or his mother what he had done. 7 Then he went down and talked with the woman, and she pleased Samson. 8 After a while he returned to marry her, and he turned aside to see the carcass of the lion, and there was a swarm of bees in the body of the lion, and honey. 9 He scraped it out into his hands, and went on, eating as he went. When he came to his father and mother, he gave some to them, and they ate it. But he did not tell them that he had taken the honey from the carcass of the lion

37 Then Jesus gave a loud cry and breathed his last. 38 And the curtain of the temple was torn in two, from top to bottom. 39 Now when the centurion, who stood facing him, saw that in this way he breathed his last, he said, "Truly this man was God's Son!" 40 There were also women looking on from a distance; among them were Mary Magdalene, and Mary the mother of James the younger and of Joses, and Salome. 41 These used to follow him and provided for him when he was in Galilee; and there were many other women who had come up with him to Jerusalem.

Hebrews 1: 10 And, "In the beginning, Lord, you founded the earth, and the heavens are the work of your hands; 11 they will perish, but you remain; they will all wear out like clothing; 12 like a cloak you will roll them up, and like clothing they will be changed. But you are the same, and your years will never end."

Isaiah 28: 14 Therefore hear the word of the Lord, you scoffers who rule this people in Jerusalem. 15 Because you have said, "We have made a covenant with death, and with Sheol we have an agreement; when the overwhelming scourge passes through it will not come to us; for we have made lies our refuge, and in falsehood we have taken shelter"; 16 therefore thus says the Lord God, See, I am laying in Zion a foundation stone, a tested stone, a precious cornerstone, a sure foundation: "One who trusts will not panic." 17 And I will make justice the line, and righteousness the plummet; hail will sweep away the refuge of lies, and waters will overwhelm the shelter. 18 Then your covenant with death will be annulled, and your agreement with Sheol will not stand; when the overwhelming scourge passes through you will be beaten down by it.

Philippians 3: 7 Yet whatever gains I had, these I have come to regard as loss because of Christ. 8 More than that, I regard everything as loss because of the surpassing value of knowing Christ Jesus my Lord. For his sake I have suffered the loss of all things, and I regard them as rubbish, in order that I may gain Christ 9 and be found in him, not having a righteousness of my own that comes from the law, but one that comes through faith in Christ, the righteousness from God based on faith. 10 I want to know Christ and the power of his resurrection and the sharing of his sufferings by becoming like him in his death, 11 if somehow I may attain the resurrection from the dead.

Thank you so much Leah and Brian!

Magnificent artwork, Anne! Great composition in this Holy Spirit led masterpiece. So timely for Rosh Hashanah, too! Congratulations on your most recent sale! F/L

This is the right time of year for blowing the shofar Beverly, thanks again!

Kim and Pristine, thanks so much!

Congrats on your sale! -Kim