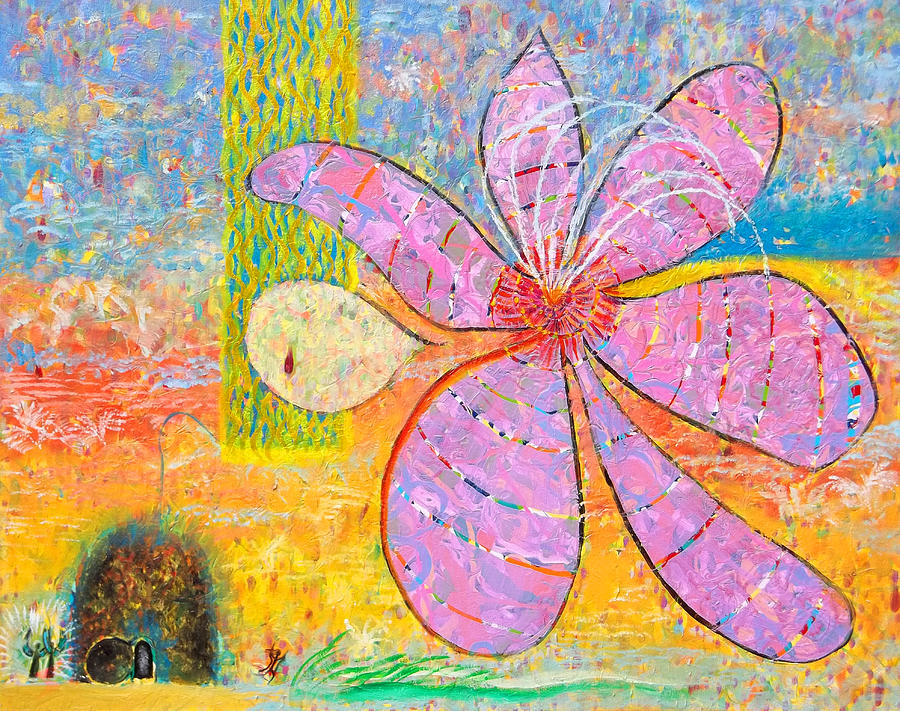 This is my interpretation of the excitement of Mary Magdalene finding the tomb empty. This is a biblical story after Jesus crucifixion and Mary went to the tomb to tend to it and found Jesus gone. Here is the scripture:
1 When the Sabbath was over, Mary Magdalene, and Mary the mother of James, and Salome bought spices, so that they might go and anoint him. 2 And very early on the first day of the week, when the sun had risen, they went to the tomb. 3 They had been saying to one another, "Who will roll away the stone for us from the entrance to the tomb?" 4 When they looked up, they saw that the stone, which was very large, had already been rolled back. 5 As they entered the tomb, they saw a young man, dressed in a white robe, sitting on the right side; and they were alarmed. 6 But he said to them, "Do not be alarmed; you are looking for Jesus of Nazareth, who was crucified. He has been raised; he is not here. Look, there is the place they laid him. 7 But go, tell his disciples and Peter that he is going ahead of you to Galilee; there you will see him, just as he told you." 8 So they went out and fled from the tomb, for terror and amazement had seized them; and they said nothing to anyone, for they were afraid. 9 Now after he rose early on the first day of the week, he appeared first to Mary Magdalene, from whom he had cast out seven demons. 10 She went out and told those who had been with him, while they were mourning and weeping.

This image portrays a large flower with a virtually empty thought bubble overshadowing the empty tomb. There the stick figure of Mary Magdalene is running furiously; her body empty with her thoughts and fears missing the symbolism above her. The fountain coming out of the flower, the river beside it with a single thread connecting it to the tomb.The life and wellspring that is the resurrected Christ. The thought bubble with a single drop --is it a tear or blood? The flower is there saying "I am still here" speaking to the concept as to where Jesus was, before he appeared again in bodily form. This flower metaphor in all it's spiraling flat manifestation, speaks to how little we really know about God and His Heavenly works.

Great job on the sale!

Congratulations on the sale!

CONGRATULATIONS!! Your beautiful artwork has been Featured by the - CATHOLIC ART GALLERY - group on Fine Art America / PIXELS! Thank you for sharing it !! http://tinyurl.com/CatholicArtGallery

Thanks Fania, I thank God Every Day and I ask him to improve my work too!

Very beautiful -- thnak God for your gift of art!!!